Cloud Computing Critical To Working From Home Trend: The world lent heavily on a new digital infrastructure when the coronavirus crisis struck earlier this year — and, for the most part, the system bore the strain.

This year’s surge in videoconferencing, online shopping and video gaming has put businesses such as Zoom and Netflix in the headlines. But some of the companies that provide the foundation for these services could turn out to be equally big winners from the lockdown.

Cloud computing — where data is stored and applications processed in large centralised data centres, with users accessing the technology over the internet — has been on the rise for two decades. Wall Street is now betting that the pandemic will bring a step-change in the uptake of the technology.

RELATED: Working From Home Benefits Employers The Most

Cloud technology already accounted for 15 per cent of the $1.56tn spent on IT last year — up from 7 per cent in 2015, according to analysts at Morgan Stanley. They predict that the increased reliance on the cloud in a time of crisis will only cause this shift in IT spending to accelerate.

Summing up the short-term impact of the pandemic, Microsoft chief executive Satya Nadella said in April that this year’s crisis had already brought “two years’ worth of digital transformation in two months”.

Both Microsoft and Amazon, which run the two biggest cloud platforms, have seen their stock market values propelled above $1.5tn on hopes that this points to a lasting shift.

A switch to the cloud has eased the strain on many businesses trying to deal with upheaval. Capita Software, for instance, had just unified its 24 customer service desks on a single system from cloud software company ServiceNow when the crisis hit.

Besides making it possible to switch all its workers to remote operations within a day, customers have taken quickly to an internet-based service when working from home, said Michael Noonan, head of operations for Capita’s software group.

Drawing on centralised resources, cloud services have generally been able to handle this year’s surge in digital demand — though Microsoft’s Azure platform was forced to trim back some services in the earliest days of the crisis to handle the strain.

Switching a large part of the world’s white-collar workforce to working from home almost overnight “would have been inconceivable 10 years ago”, said Byron Deeter, a partner at Bessemer Venture Partners, a start-up investor in Silicon Valley.

Also, the time it takes to write and test new software makes traditional “on premise” computing, where companies run applications in their own data centres, less adaptable in a time of rapid change. That has led businesses to look outside for technology to support the new ways of working forced on them by the pandemic. 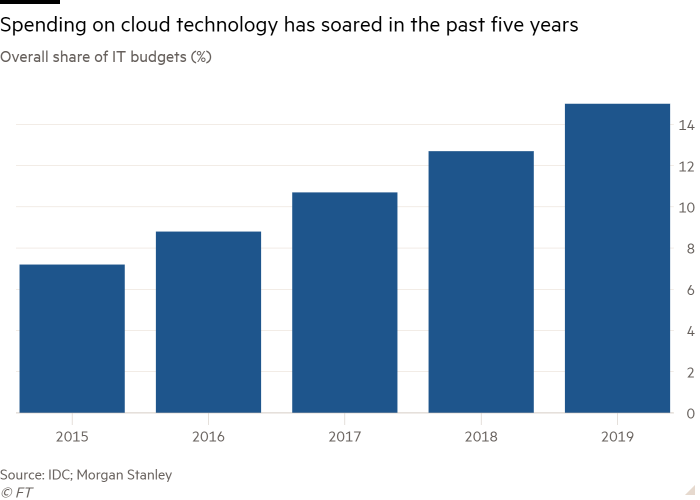 “Companies have had to have a much more direct relationship with their customers. They’re having to bypass existing work processes because often they don’t have access to those processes,” said Bill McDermott, chief executive of ServiceNow.

The experience of companies like Zoom points to the greater prominence that cloud infrastructure has assumed on the IT landscape during the crisis.

In the space of three months earlier this year, the number of minutes spent in the company’s video meetings jumped by a factor of 20 — the sort of surge in demand that would normally jeopardise service quality or lead to outages.

The videoconferencing company said it had been able to draw on Amazon Web Services for the extra computing capacity. It also branched out and added Oracle as a second cloud supplier, giving a valuable endorsement to a traditional software company that has been slower to pivot to the cloud.

Zoom also depends on services from other on-demand software companies to run its business — part of an array of cloud-based start-ups that have sprung up to handle many specialised business processes.

These include PagerDuty, which sells an incident response service used by corporate IT departments: as the crisis hit, the number of incidents reported by customers such as Zoom through its service jumped more than eight-fold, the company said. 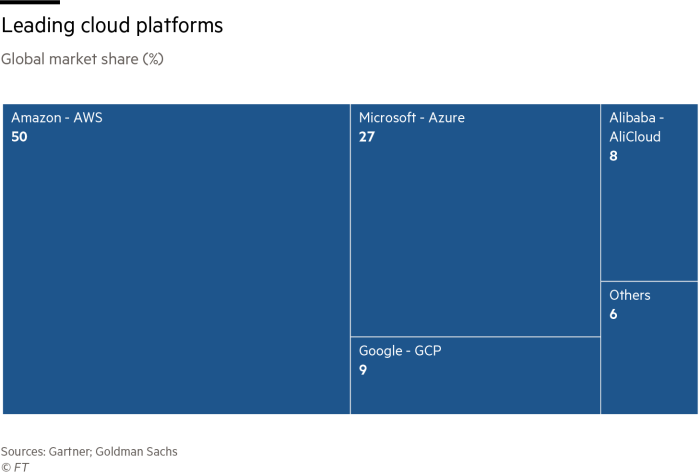 The upheaval has led many companies to speed up their digital strategies, said Jennifer Tejada, PagerDuty’s chief executive. “The whole world shifted to ecommerce overnight — most companies weren’t ready for that,” she said. As a result, “things we thought were going to take years got pulled forward to this year and done in months”.

Most executives at cloud companies describe the impact of the pandemic in terms of time, rather than the ultimate level of demand for their services.

Dan Springer, chief executive of DocuSign, an “esignature” company that automates the handling of formal agreements and contracts, said his company’s underlying growth rate was unlikely to change when the pandemic subsided.

But he added that DocuSign had seen a “one-time bump up” in business that put it about a year ahead of where it would otherwise have been.

“We’ve accelerated the transformations that were going to happen anyway. It’s brought demand forward,” he said. New customers since the crisis hit include New York’s Department of Labor, which adopted a new cloud-based system to pay out emergency unemployment benefits.

‘No one goes back to using paper’

Much of the new online activity could turn out to be temporary as workers start to return to the office, and demand for online shopping, entertainment and education falls back. But investors are betting that online habits developed in the lockdown will endure, and that new cloud-based business processes will become entrenched.

“No one goes back to using paper and manual processes,” said Mr Springer.

That has made cloud stocks, which were already trading at lofty levels before the crisis, a hot property. The Bessemer Emerging Cloud Index, made up of 52 US cloud software companies, has risen 50 per cent since the start of the year, at a time when the wider market has lost ground.

It has more than doubled since the stock market’s low point in mid-March, lifting the combined value of cloud companies in the index — led by Adobe — to $1.4tn.

With cloud services expected to soak up a larger share of corporate IT budgets, meanwhile, the outlook for tech companies that depend on selling an older generation of technology has become more uncertain.

Shares in both IBM and Hewlett Packard Enterprise have fallen back this year, while Dell has only edged ahead on hopes it will spin off its large holding in software company VMware. 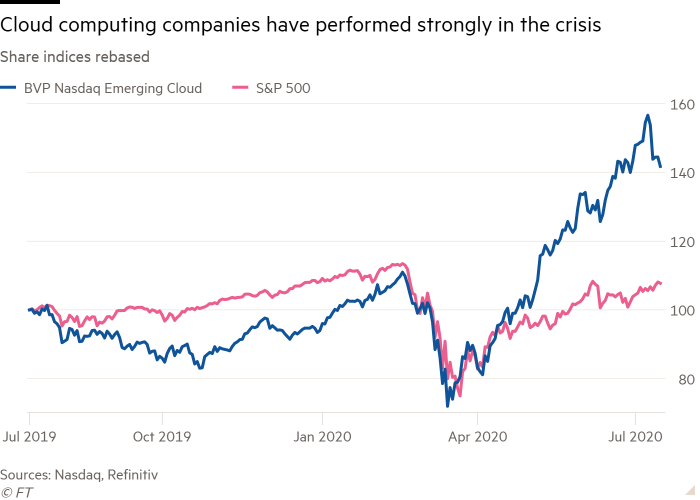 Between them, the three old powers of the IT world had sales of $186bn last year, and a combined enterprise value at the end of last week (excluding Dell’s stake in VMware) of $213bn. That is about the same value as cloud software company Adobe, whose sales last year were just $11.2bn.

The sharp divergence in stock market fortunes has left cloud stocks looking even more stretched. Shares in DocuSign now trade at 26 times this year’s expected revenue, double the multiple they were trading at before the crisis hit.

Expectations for Zoom’s revenue this year have doubled on the back of the videoconferencing boom — but its stock price has risen even faster, and its shares now trade at 42 times expected revenue for 2020, up from 31 before the crisis.

The re-rating of the cloud companies has come despite the fact that many of their small and medium-sized business customers face an uncertain future, and sectors such as travel and entertainment are in deep recession.

The tough economy has caused “headwinds”, admitted Mr Springer at DocuSign — though he claimed these would be outweighed by the “tailwinds” from the shift to the cloud.

Even supporters question whether the rally in cloud stocks has gone too far. A re-rating relative to the overall market has been justified given the swing to digital activity, said Mr Deeter. But he added: “What is a harder question is whether these valuations make sense on an absolute basis.”

National Bank Of Canada Employees Will Continue to Work From Home

National Bank of Canada, which had reopened its offices at 50% capacity, is asking employees to work...
Read
Work From Home

Neck And Back Pain While Working From Home

Neck And Back Pain While Working From Home: Elizabeth Cuthrell, a Manhattan-based film producer, used to work...
Read
Work From Home

Working From Home Benefits Employers The Most

Shaddox’s experience of feeling better connected to both his company’s purpose and management during the crisis even while working from home.
Read

National Bank Of Canada Employees Will Continue to Work From Home

National Bank of Canada, which had reopened its offices at 50% capacity, is asking employees to work remotely if they...
Advertisment

Highlighting the benefits of super successful startups that became a unicorn is common in media. Stories of startups becoming unicorns or entrepreneurs making a fortune...

Shift Away From Cash And Credit Cards To Digital Wallets

How To Start A Drop Shipping Business In Canada?

You should take several steps to launch an e-commerce venture. First, you should find a niche. Next, you should choose a province to headquarter your...

Want to stay up to date with the latest news?

Ambitious entrepreneur, Jordan Hill, took a leap of faith after finding himself unemployed and moving from Scunthorpe to Leeds to start a business with...

With more and more entrepreneurs seeking to create their own website content, start a blog and retain control over design features, both Squarespace and...